Crossfire is a shooting online game that is free for everyone. It is created in 2007 and attracted many young players, even some grown ups because the game was really popular at the time. Now a days, this game is still popular due to its graphic in the game and experience playing this game. In addition, there are many different game mode the players can play. This can bring freshness into the game so the players doen't have to stick on the same game mode everytime they play it. Crossfire can bring both positive and negative emotion to the players because the player can feel happy when they are playing the game, but also feel angry when someone in the else game shows negative attitude toward the players. In addition, this game has a lot of positive and negative reviews based on players that is playing the game.

There are some positive and negative things about Crossfire. First the negative part of the game is there are a lot of toxic or considered "salty" people because they kick people for no reason. This means when people are doing well, the other people would just kick the person because they think the person is "hacking", but in fact he/she is just better than others. Another negative part about Crossfire is in order to get something permanent such as gun or other equiqment in the bag, they most likely have to spend real money on it. But some people might not able to afford or purchase those items in the game. 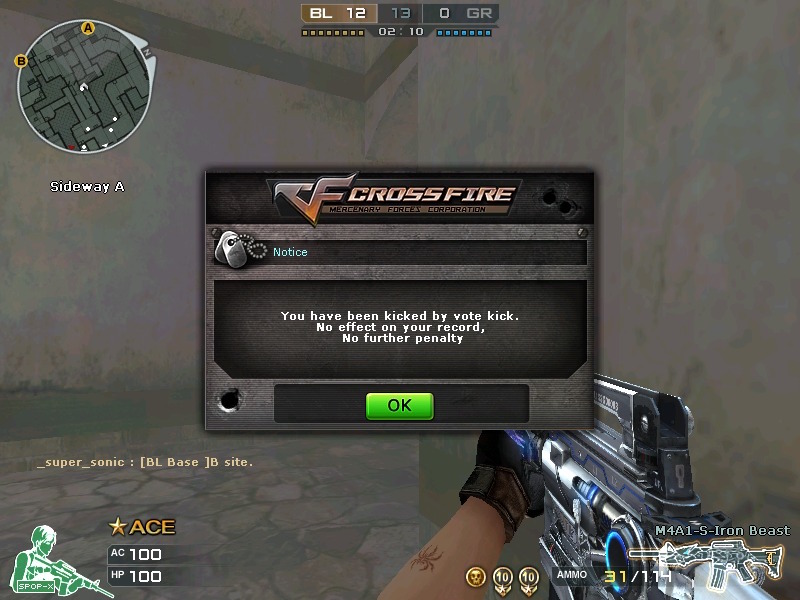 Another negative part about crossfire is some people in the game use hacks, which allows they cheat in the game. Many players got mad by this action took by others, so the Crossfire workers should fix the game and not allow hacks. This happen really often and for this reason, so people quit playing the game. Here is an example that someone would hack in Crossfire. This player is able to see through walls and shoot through walls, this can anger many people because it is not fair.

The positive part of playing this game is it can bring enjoyment for the players. For example, there are many game mode in the game that players can play. Which involves the players to do different missions,and there can be teamwork among the players. In this game, the players are able to use the voice chat in the game to communicate with each other. This can be use when you are playing with a friend, you can tell your friend what to do if they are new to the game, or just talking about the game that is happening so far.

Another postive part about the game is the game contain some excitement. In this game, there is a game mode called zombie mode, which is working with your team to kill all the zombies around you. There are some maps where you have to escape with your team to survive, you also have to use what is provided around you. In that kind of maps, players can't use the weapon they equip in their bags, so it would be more fair. The weapon that the players use that they have in the bag might make the mission too easy, so the players can only use the weapon that the game provided.

The improvemnt that can be made:

Here are the image source that I used on this website, It is from Google.