Welcome to League of Lengends

League of Legends (abbreviated LoL) is a multiplayer online battle arena video game developed and published by Riot Games for Microsoft Windows and OS X. The game follows a freemium model and is supported by microtransactions, and was inspired by the Warcraft III: The Frozen Throne mod, Defense of the Ancients

League of Legends has an active and widespread competitive scene. In North America and Europe, Riot Games organizes the League Championship Series, located in Los Angeles and Berlin respectively, which consists of 10 professional teams in each continent. Similar regional competitions exist in China, South Korea, Taiwan, South America, and Southeast Asia. These regional competitions culminate with the annual World Championship, which in 2013, had a grand prize of $1 million and attracted 32 million viewers online. The 2014 and 2015 tournaments each gave out one of the largest prize pools in eSports history, at $2.3 million. Winners also receive trophies, such as the Summoner's Cup, which was made by silversmiths Thomas Lyte. The 2016 World Championship's total prizepool was over 5 million dollars, with over 2 million going over to the winner of the tournament. 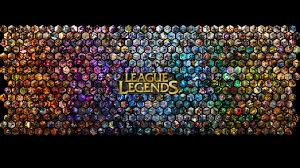 League of Legends is a 3D, third-person multiplayer online battle arena (MOBA) game. The game consists of 3 current running game modes: Summoner's Rift, Twisted Treeline, and Howling Abyss. Another game mode, The Crystal Scar, has since been removed. Players compete in matches, typically lasting 20–60 minutes. In each game mode teams work together to achieve a victory condition, typically destroying the core building (called the Nexus) in the enemy team's base. In all game modes, players control characters called champions, chosen or assigned every match, who each have a set of unique abilities. Champions begin every match at a low level, and then gain experience over the course of the match to achieve a maximum level of 18. Gaining champion levels in matches allows players to unlock their champion's special abilities and augment them in a number of ways unique to each character. Players also begin each match with a low amount of gold, and can earn additional gold throughout the match in a variety of ways: by killing non-player characters known as minions and monsters, by killing or helping to kill enemy players, by destroying enemy structures, passively over time, and through unique item interactions or champion abilities. This gold can then be spent throughout the match to buy in-game items that further augment each champion's abilities and game play in a variety of ways. Champion experience, gold earned, and items bought are specific to each match and do not carry over to subsequent matches. Thus, all players begin each match on more-or-less equal footing relative to their opposing team. Across matches, players also earn rewards that are specific to the individual, and augment matches played. Player experience is earned by playing matches over time on a particular account. Player accounts begin at level one and progress through a maximum level of 30. As a player progresses they unlock content initially barred to new players. These including "summoner spells", abilities to be used in battle, and Runes and Masteries, which can be used to provide small statistical power bonuses to a player's champion. Player level is separate from character level; both a level 30 account and a level 5 account would begin at character level 1 at the start of a new game. Accounts are given rankings based on the Elo rating system, with proprietary adjustments. These ratings are used in automated matchmaking to make games with players of comparable skill level on each team.

League of Legends consists of three main maps, or "Fields of Justice." Each have different terrain, objectives and victory conditions, as well as varied summoner spells and items. A fourth map, Crystal Scar, was discontinued.

There are currently 134 champions in League of Legends as of 2016. League divides its champion types up a number of ways. Additionally, champions can be customized by buying different items and using different runes. The most salient difference is the type of damage a champion deals; some champions deal largely physical damage, resisted by the armor stat, and other champions deal largely magic damage, resisted by the magic resistance stat. Some champions deal a combination of both and can choose which to emphasize; and some rare abilities deal 'true' damage which is unresistable. Riot Games has classified all champions as one of six types to aid beginners, and have an additional "class" and "subclass" system used informally on the side. Not all champions perfectly fit their type, of course. The official Riot classifications are

Item choice plays an important role in the above. For example, if the champion Jarvan IV purchases all damage items, he functions something like an Assassin; he can kill enemies quickly, but dies rapidly himself. If Jarvan buys all defensive items, he's a tank focused on disruption and buffing his allies. Somewhere in-between, he's a Fighter. In the same way, champions like Morgana, Annie, and Karma can build item sets that are focused on high damage like a Mage, or item sets focused on disrupting enemies and aiding allies like a Support.

League of Legends was released on October 27, 2009. Riot Games self-publishes and operates the game and all of its customer service aspects in North America. Riot Games has signed deals regarding the distribution of League of Legends in Asia, Europe, and North America. By July 2013, the game has been released and was distributed in Australia, the United States, Canada, Europe, Philippines, and South Korea. No public announcements regarding other regions have been made. The game is distributed in China by Tencent Inc., the largest Internet value-added services company in China best known for its QQ Instant Messaging client. The game has been distributed to Tencent's growing 300 million Internet user base through its leading QQ Game portal. The deal was one of only a handful of partnerships to bring a U.S.-developed online game directly to China. On July 14, 2009, Riot Games announced that League of Legends will be free with "no catch". There will be a digital copy for download, but there is also a Digital Collector's Copy that will be available to purchase that contains exclusive skins, $10 credit for Riot Points, and 20 champions to access without unlocking them normally via gameplay as well as 4 "special" runes. This Collector's Pack is currently available for US$29.99. Even though the game is free, Riot Games "plan[s] to continue to add content (characters etc...) with a full production team at very frequent intervals." In Europe, Riot Games initially signed an international licensing partnership with GOA, the video games department of Orange's Content Division and Europe's largest gaming portal. On October 13, 2009, GOA and Riot announced that they would start channeling server access for players located in Europe to GOA's dedicated servers. This partnership did not last; on May 10, 2010, Riot Games announced that they would take over distribution and operation of the game in Europe. To do so, Riot Games established a European HQ in Dublin. On July 16, 2010, Riot Games announced that Garena would publish the game in Southeast Asia. Additionally, Southeast Asian players had the ability "transfer accounts" to import their progress stored in North American or European servers into the Southeast Asian server. The game has since been distributed by Garena in Taiwan as well. In March 2013, Riot Games released a beta version of an OS X client in addition to their Windows client. The Mac client was since moved out of beta and OS X / macOs players have had full access to League. Riot has since expanded to many countries, after the initial North America / Europe / Korea / Garena's Southeast Asia launch. In 2012, a Brazilian and Turkish server were added; in 2013, Latin American & Russian servers; and a beta of a Japanese server was launched in 2016.